When I was in elementary school, we would sometimes get breakfast for lunch.  It was usually french toast and sausage and breakfast potatoes and chocolate milk - quite the treat for an 8 year old.

Lately, nothing has sounded good to eat except cereal, bagels and poptarts - mostly thanks to heartburn.  So, my trip to the grocery store on Sunday ended up with this: 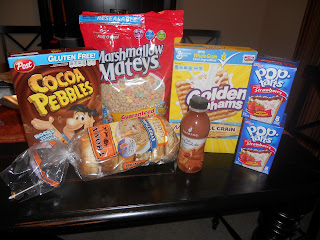 Yep, 3 boxes of cereal, everything bagels, Pop-tarts, and chocolate milk.  This is in addition to the multiple bags of Frosted Mini Wheats, Honey Nut Cheerios, and granola already in our pantry from Costco.

In other pregnancy cravings, I also ended up with this: 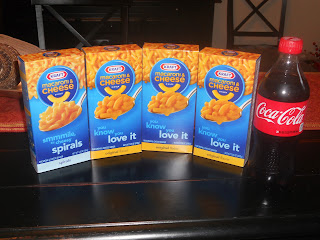 Who doesn't love Mac and Cheese?  I've been trying to stay away from caffiene in general but have had a Coke here and there lately and I'm not gonna lie - its delicious!  I've been drinking diet for so long I forgot how good real Coke is.

For those of you worried about what the heck my husband is eating and/or the nutritional health of my unborn child, I also bought some healthy stuff.  And I'm proud to say that I also rejected the cute little girl scouts and their cookies (though I was quite tempted)... 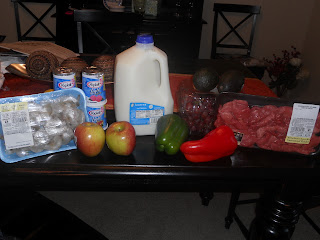 I still manage to cook most nights but planning has been difficult - sometimes things that sound good earlier in the week DO NOT sound good on another given day of the week.  Anything with tomatoes gives me heartburn so pasta with tomato sauce is not an option - unfortunate since its one of my go-to meals on nights when I don't get home from work until after 7pm.


I'm hoping it will be easier on Andrew come summer time when he can throw some meat on the grill while I enjoy my Golden Grahams.
Posted by Sarah @ For the Hall of it at 2:41 PM