Sugar and Spice or Snails and Puppy Dog Tails?

The big day is coming up soon!  We get to find out if Baby H is a boy or girl.  I seriously CAN'T wait - I'm so excited to start my shopping.  Andrew may keep my credit cards that day so I don't spend thousands hundreds of dollars on baby clothes after our ultra sound.

There are lots of theories out there on predicting your baby's gender.  I did a Google search some research on the topic and thought I would share my results with you.

First, let me preface that there is WAY more info out there than I could have ever thought.  There are old wives tales that are funny, some are outright crazy (if you want a girl, sleep with a pink bow, a wooden spoon and scissors under your pillow), and others I'm unwilling to try or share.  For example, I don't want to mix my urine with any other household product (Drano) nor do I want to share what sex position the baby was conceived in.

So, lets look at some of the less creepy and more common theories:

*If you prefer sleeping on your left side, you'll have a boy. Right side? A girl.
I prefer my right side but that is mainly because on my right side I'm facing the outside of the bed.  I get claustrophobic so don't like facing the middle.  In reality, I flip back and forth all night.  But I will say GIRL for now on this one.

*Extreme nausea means you are having a girl.
I had ZERO morning sickness so I will say BOY

*If your hands are dry, you are having a boy; soft -- expect a girl.
My hands are often dry but that is because I wash them or use hand sanitizer up to 15 times per day.  But tack on another point for the BOY team.

*If you're craving citrus, you're having a girl.
I have craved fruit in general but not so much citrus fruits.  So I will call this one a tie.

*If your skin breaks out, expect a girl.
I broke out quite a bit in my first trimester but since then my skin has been great.  BOY.

*If you feel graceful during pregnancy, you'll have a girl. Clumsy? It's a boy.
I don't feel either so I will remain gender neutral on this one.

*If you gain weight in your face, it means you're having a girl.
My husband says no - however, I think he's smart enough to not tell a pregnant lady in any way shape or form that she is fat so I don't necessarily know if this is an accurate answer - but I'll say BOY anyway.

*Craving salt? Expect a boy. A little something sweet? You're having a girl.
Definitely have craved more salt/sour things.  Had an aversion to chocolate for a while.  In general I crave carbs.  What does that mean?  I'll say BOY.

*If your right breast is larger than the left, you are having a girl. If the left is larger, a boy.
Left is larger.  BOY.  Sidenote:  Andrew really enjoyed determining the answer to this question ;-)

*Feeling extremely moody? Expect a girl.
At first, I didn't feel I had that many mood swings but the last few weeks I get annoyed more easily and cry more often.  Point for the GIRL.

*If baby is low, expect a boy. High, it's a girl.
I think I'm carrying low so BOY

*If you're carrying in front, it's a boy. All around your middle? A girl.
As much as I wish I just had the little basketball, I've got more of a watermelon thing going on so I will say GIRL

*How would you show someone your hands? Palms up? It's a girl. Down? A boy.
This is a dumb questions - now that I know what the answers mean I can't say how I would truly do it.

*If a toddler boy shows interest in your belly, you'll have a girl. If he ignores you, it's a boy.
I hung out with Silas (18 months old) for a while on Monday - he showed no interest in my belly.  He did like riding the dinosaur at the park. And waving at me.  Gosh that kid is cute. 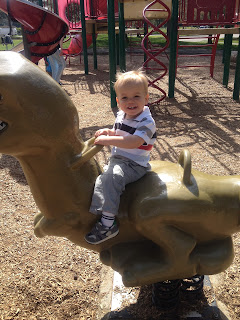 *A child tends to be of the same sex as the parent who is less stressed at the time of conception.
Andrew is ALWAYS less stressed than me....so BOY.

*If you dream about having a girl, you will wind up having a boy and vice versa.
I've had 2 dreams now that I'm having a boy so I guess that means GIRL.

*The Chinese Gender prediction calendar claims 90% accuracy.  It is some algorithm based on the mothers age at time of conception and month of conception.
Whether we conceived in December or January, it says BOY.

So it looks like we have 10 definite BOY answers and 4 GIRL answers with 5 that could go either way.

What do I want?  Honestly, I'm happy either way.  I grew up with a big brother (who is the best big brother I could have asked for) so it only seems natural to me to have a boy first.  Andrew has a younger sister so it was boy first in his family too.

I have a girl name chosen but have no boy name that I like (other than Andrew but he doesn't want to name a kid after himself).  I will post later on my philosophy not to share my baby name until after he/she is born.

So tell me...what do YOU think we are having?  Leave me a comment and we'll see who's right in a week or so!