I managed to catch Andrew's head cold.  Yuck.  I also have not slept well the last several nights - Andrew was gone Friday night and I never sleep well when he isn't home.  Saturday sleep was okay but we went to bed late and I didn't get to nap on Sunday.  Sunday night I was anxious for our ultrasound so was dreaming about it and waking up afraid my alarm wouldn't go off.  Last night I felt tired but couldn't fall into a deep sleep.  I wasn't feeling great last night and didn't feel much better this morning.  But in addition to feeling yucky, I just felt like I wanted to cry.  I got about half way ready and just couldn't keep it in.  I called my boss and said I wasn't feeling well and just planned to take the morning off.  This is the second time in six years of working that I have called in sick.  I've probably taken a grand total of 3 or 4 sick days over the years.  Usually I go in and suck it up and if float coverage is available or I can move people around I will go home early.  I feel so terribly guilty for missing work because it is such a pain to have to cancel patients or move them around.

Anyway, after I cried for a good half hour, I snuggled back into bed with Andrew and the puppy and got a few more hours of sleep, lounged in bed for a while and then got up and dressed and started to eat lunch.  I emailed my manager and told him I would be in after lunch and he called and said that they would be able to move all my patients to other people so I didn't need to come in if I wanted to stay home.  I am so relieved because now I can stay home and not feel guilty about missing work.

So, since I'm lounging on the couch, I thought I would share a few random things in a blog post.

First, I ordered this amazing wall decal for our nursery off of Etsy.  I promised Andrew a Virginia Tech themed nursery since we have a VT rocking chair from the Cracker Barrel.  I have to say I'm really excited that we are having a boy because this theme might be a little harder to pull off if we were having a girl.  But I don't want our nursery to look like a sports bar either.  I don't really want to pain the walls maroon and orange because the colors are so dark.  So I found this wall decall and had the ownder of the shop custom designed it for me in VT colors. 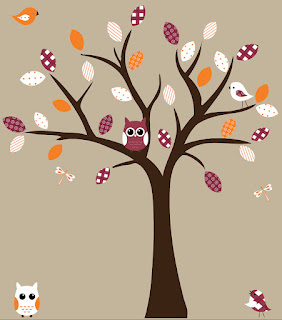 I'm so excited to put it up and start decorating the nursery.  I will be sure to post pictures when we get it done (however, its a LONG way from even being close to ready).

On another note: we have rhubarb growing in our yard.  Last year, my friend Ali harvested my rhubarb and made me some yummy scones.  So I decided to try my hand with it this year.  I found a recipe for rhubarb muffins and they are really good!  Here is the recipe for you:

Directions:
Preheat the oven to 350 degrees F (175 degrees C).
Grease two 12 cup muffin pans or line with paper cups.
In a medium bowl, stir together the flour, baking soda, baking powder and salt.
In a separate bowl, beat the brown sugar, oil, egg, vanilla and buttermilk with an electric mixer until smooth.
Pour in the dry ingredients and mix by hand just until blended.
Stir in the rhubarb and walnuts.
Spoon the batter into the prepared cups, filling almost to the top.
In a small bowl, stir together the melted butter, white sugar and cinnamon; sprinkle about 1 teaspoon of this mixture on top of each muffin.
Bake in the preheated oven until the tops of the muffins spring back when lightly pressed, about 25 minutes.
Cool in the pans for at least 10 minutes before removing.
Notes:  I didn't have buttermilk and was too lazy to go to the store.  You can make your own buttermilk by using 1 TBSP of white vinegar in about a cup of milk and let sit for five minutes.  I also macerated the rhubarb in some sugar before adding it to the recipe to decrease the tartness of the rhubarb.  I also made extra of the cinnamon/butter/sugar mix to put on top since the orignial amount didn't seem to cover all the muffins.  I also omitted the walnuts because why ruin good muffins with nuts?
﻿

These turned out really good.  The tartness of the rhubarb is a nice contrast to the cinnamon and sugar sweetness of the muffins.