Why I won't tell you my baby name

Let me preface this by saying we are no where near deciding on a name for Baby H.  I have several names that I think are cute that I have mentioned to Andrew only to get a response of "eh, its okay.  I don't love it."  So, I assigned Andrew the task of making a list of names that he does like/love - but his general opinion is "we have 4 months, do I really need to decide this now?"

When we do decide on a name, I don't plan to tell anyone.  Well, maybe a very close friend or two just to get an honest opinion but otherwise no one else.  Why?  Couple reasons.

1) While most people would probably be quite gracious, you always have that one person who will say "I knew a person named so-and-so - they were the worst.  Ended up being a transvestite serial killer."  Or "You know that all the kids at school will call him this or that."  Frankly, I don't want to someone to ruin the name for me.  If I introduce them to my son and say this is so-and-so, then they will more likely marvel at what a handsome baby boy he is than tell me why they don't like the name I chose.  Who can insult a baby's name to his face?

2) What if I change my mind come game day?  What if I choose the name Dawson and then when he comes out decides he looks more like a Pacey?  (who can guess what I'm watching as I type this?).  Everyone will think his name is one thing and then I will have to correct them.

3) What if somone steals my name?  I know lots of people who are pregnant and this seems to be the year of the boy.  If I announce my baby name publicly, then someone may steal it (intentionally or unintentionally) and if their boy is born before ours then we will seem like copy cats.  The chances of someone we know very well taking our name and our children spending large quantities of time together is probably slim but I'd rather not take it.  If someone who has a baby before us uses our name, then we can decide if we still want to use it or change to something different.

4) I like the element of surprise - I want to see our family and friend's reaction when I tell them the name as they actually meet him.  Its way more fun that way.

Here are a few ideas of what we won't be using
So, sorry if you wanted to know our name but I probably won't share until he is born.  At this rate we may not even have one if we don't start thinking harder about it :-)

On a separate note, I spent a while Saturday working on my thank you cards.  I think they turned out pretty well.  The pajama stamp I found at a garage sale and the thanks was one I already have.  I'm a big fan of the block stamping because you can design your own with the different parts. 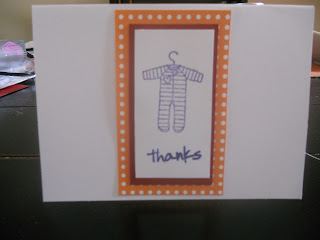