I treat a lot of pregnant women at my job especially in their last trimester.  I've heard multiple women say how ready they are to be done with pregnancy.  I never really understood until now.

I'm tired of losing sleep.  Everyone says this prepares you for the late night feedings and what not.  However, when I'm on maternity leave and am up multiple times during the night, I don't have to get up and work a 10 hour day in the morning.

I really shouldn't complain.  I'm truly blessed by all the people who take such good care of me from my parents to my inlaws to my husband.

We got a little wrench in our plans this week - it looks like we will have to switch doctors.  I have been seeing a midwife throughout my pregnancy named Shana.  I really didn't go into the pregnancy particularly wanting a midwife as my provider - I had been seeing Shana for my regular women's health care and I really like her personality and generally tend to like working with Nurse Practitioners anyway since they tend to spend a little more time with you.

Anyway, Shana is leaving the current practice (Center for Women's Health) to open up a midwifery clinic based in the hospital.  There, she and 5 other midwives will be able to provide 24/7 midwife care at the hospital and will work under the hospital OBs.  This transition is taking place in early September.  My plan was to transfer my care over to the new practice so that I could continue working with her.

On Thursday evening, I got a voicemail from Shana telling me that the new OB's that she will be working with at the hospital don't want her taking patients who have gestational diabetes who are on medications.  In her current practice, she can take patients with GD on oral meds but has to co-treat with an MD if the patients are on injected meds.  She thought it would be the same at the new practice but they want to keep everything super low risk for the first few months.  So, since she is leaving, I have to transfer my care to one of the OBs at the Center for Women's Health.

I cried.  Granted, I had not slept well the night before, had gotten up at 5 to take Andrew to the airport, had a non stress test over my lunch hour which just makes me feel rushed so it had been a long day.  I'm sure the other doctors are fine and I have no worries about my health or the safety of my baby.  Its just going to be hard to have 4 weeks to get to know a new provider and communicate my wishes and desires about delivering my baby.

My biggest fear is getting pushed into a C-section by an MD because they think things aren't going fast enough.  I think that's probably an irrational fear but I just know that midwives tend to be more patient and aren't as quick to jump to meds to "speed things along."

I know that God is in control and all will be fine.  It just makes me a little stressed out.

On a more positive note, I thought I would show you all a few pictures from the shower that my friends had for me here in Seattle. 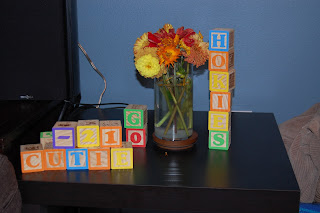 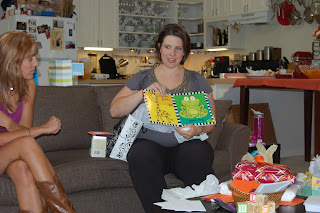 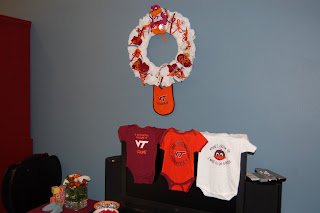 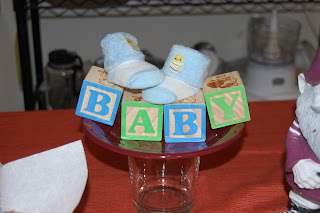 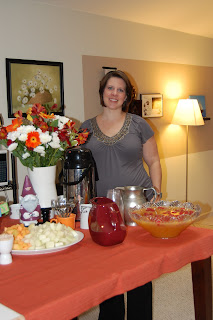 ﻿ I also thought I throw in a couple pictures of my nephews - they are pretty cute!