Time is not slowing down!  I'm 36 weeks (well, at this point because this post is 5 days late, I'm almost 37).  Basically, Baby H could appear at any time.  And that freaks me out a little.  My house is a complete disaster.  Crib and dresser in boxes in the living room along with the stroller, pack n play, boppy, my brest friend pillow, diapers, activity mat, and all the other little things that arrived on my doorstep via Amazon.com over the last week.  We have been so busy with the Tacoma house (which is almost finish - hoping to get it listed this week!) that we have spent very little time on our own.

But here is the 36 week update....I won't post all the photos since aligning them on the blogger site is ridiculously frustrating. 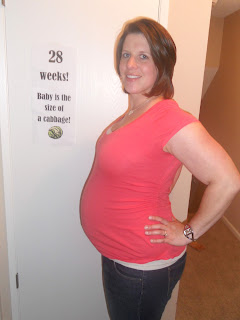 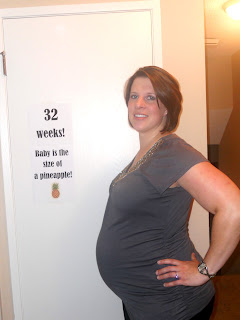 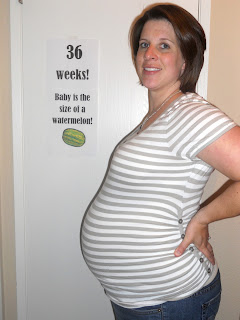 How far along? 36 Weeks
Total weight gain/loss: 39 pounds.  I have only gained about 1 or 2 pounds since the 32 week mark likely due to the GD diet.  GD has been well under control and the kiddo performs well on his twice weekly non stress tests..
Maternity clothes? I'm ready to be done with them.  Tired of wearing the same stuff..
Stretch marks? Lots everywhere.  Hope they go away someday.
Sleep: Getting more difficult.  Fortunately after working 10 hour days I'm usually so tired that the discomfort doesn't matter.  I'm up at least once a night to pee if not twice.
Best moment this week:  Had another ultrasound.  Getting to see his heart beating is always comforting.
Miss Anything? I'm so ready for a cocktail.  And a cupcake.
Movement: He is a wiggle worm.  He likes to try and stick his foot out my belly button.
Food cravings: Carbs.  I can't have em.  I just saw a commercial for Olive Garden's never ending pasta bowl.  It sounds so good.  And I don't really like Olive Garden.
Anything making you queasy or sick: cigarette smoke
Have you started to show yet: Little bit.
Gender: Its a boy!
Labor Signs: Increasing frequency of Braxton Hicks.  Usually painless, occasionally a little pain.
Belly Button in or out? Still in.  I'm not sure it will pop out.
Wedding rings on or off? On and still can easily take on and off.
Happy or Moody most of the time: I have my moments of moodiness but for the most part I feel happy.  Knowing that he is coming soon just gets me excited to meet my little man.

Looking forward to: Saturday - we will be done with the rental house and it will be the first Saturday that we have had to just chill out since early June.  And, the VT game on Monday - Go Hokies!
Baby update:
We had a growth ultrasound on Monday.  Bottom line, baby H is a BIG boy. They estimate him at 7lb 10oz already with 4 weeks to go which puts him between 9 and 10 lbs at 40 weeks.  Granted, the US measurements are not super accurate so could be off by a pound or two.  His head remains in the 95th percentile and arms and legs close to 90th.  He has gained some weight in his belly (72nd) percentile.  The doctor said "He's not a chubby baby, just big."  Yep, still doesn't make me feel better about pushing him out my vagina.  Just sayin.
But we did get a cute little 3D picture of him - he wouldn't turn towards us but we got a good profile.  I think he's pretty cute if I do say so myself. 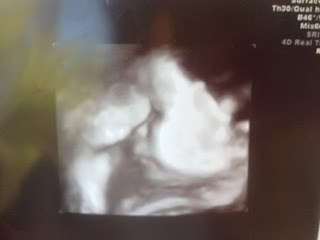 It kind of looks like he has his arm over his face (which is often how Andrew sleeps) but the tech said it is placenta.
At my OB appointment found that I'm 50% effaced but not dialated yet.  I'm thinking that once we get through the holiday weekend that I might start trying to get the ball rolling - have several techniques up my sleeve so we'll see what happens....
Here's hoping for a productive weekend.  Its baby prep weekend at the house.  Saturday is going to be chill but hoping to get the nursery done and everything set up and cleaned Sunday and Monday.  Carpet cleaners come on Tuesday!
Posted by Sarah @ For the Hall of it at 8:46 PM