Sawyer is three weeks old today!  September 18th seems so long ago yet also seems like it was just yesterday.  My how our lives have changed since then.  Its been an experience - learning how to change a diaper half asleep, learning how to do most everything with one hand while breast feeding or holding a baby, learning how to plan your day around feeding schedules.

Our birth story isn't crazy but it was unique to us.  I know that God was a part of the process even dating back to earlier in my pregnancy and ultimately this was how He had planned it.

For those of you that don't remember, I changed doctors a couple times the last few weeks of my pregnancy ultimately ending up with Dr. Wells (or Karen as she insists on being called).  Based on my diabetes diagnosis and expected 9-10 lb baby, she recommended induction anytime in my 40th week.  I chose Tuesday the 18th.

I went into the office the Monday before to have a foley catheter placed in my cervix to start the dialation process.  The catheter placement wasn't exactly comfortable but it wasn't terrible.  I managed to come home and install the car seat base afterwards.  A couple of hours later though, I started having regular and strong contractions about every 5 minutes.  The instructions are to call labor and delivery if the contractions are every 5 minutes, lasting 1 minute, for at least 1 hour (the 5-1-1 rule).  So at 8 pm, after 2 hours of 1 minute contractions every 5 minutes (tracked on my handy iphone app) I called.  The nurse said if the catheter was still in place, I wasn't dialated to 3 cm yet so to stay home until it fell out, my water broke, or the contractions started getting stronger.  So, Andrew and I watched the season premiere of Bones and the contractions died down so we went to bed.

Not that I got any sleep.  We were up at 4:15 the next morning, I called the hospital to make sure we were still on at 5:15, ate some breakfast and off we went.

We got all checked in and were met by a nurse named Katy.  I got changed to a gown, hooked up to an IV and by 5:45 the pitocin was going.  Since I had the gestational diabetes, she had to check my blood sugar every so often.  My first reading was 2 points over the normal limit (story of my life, I swear) so they had to start an insulin drip.  So we labored.  At one point she asked if I wanted to get checked to see how far I was dialated.  I said sure thinking that when I had been checked in the OB's office, it was uncomfortable but manageable.  Well, Katy is a small person and apparently has short fingers because it hurt like heck when she checked my cervix.  I'm pretty sure she stuck her whole entire arm up there.  And I was a 3.  Contractions weren't too terrible and I justed rested in bed.

Around 10, Karen stopped in to check my progress.  She checked my cervix as well and broke my water.  She thought I was at about 5 cm and hoping that breaking my water would progress things a little quicker.  Her checking my cervix was uncomfortable but not too terrible.

As the morning progressed, the contractions started getting stronger.  I tried different positions (the rocking chair, birthing ball, standing) and practiced my breathing.  My back was hurting a lot more than I expected it to.  We tried watching the Big Bang Theory - the remote for the TV didn't work so we couldn't adjust the volume or anything.  My blood sugar got too low at one point so I got to eat some crackers.  Contractions continued to get stronger and more uncomfortable.  Around 11:30  Katy wanted to check my progress.  After sticking her arm up my cervix once again, I was in tears because it hurt so much (the cervix check, not the contractions) and I decided that I didn't want to be a hero anymore and requested an epidural.

I was so much more comfortable once that epidural was placed.  I didn't care that I couldn't move around or that I could only eat ice chips.  To not have to feel any more contractions was heaven.  There was a slight panic after the epidural was placed since the baby's heart rate dropped - the nurses were scrambling, they put an oxygen mask on me, had my lie on my side for a while, and were about to give a dose of something (I think epinephrine) when it returned to normal.

So, they kept monitoring my contractions but the fetal monitor wasn't tracking things well - it kept losing the baby's heart rate because he would move or weren't tracking my contractions.  Katy eventually called for Dr. Wells to put on internal monitors on the baby's head and my uterus to better track things.  When she placed those, I was around 7 to 8 cm dialated.  Karen instructed them to keep turning me to get me dialated further.  I would lie on my side for 15 minutes and then they would flip me over the other side.  I snuck in a few catnaps every now and then.  At 3:00 I was dialated to 9 and cervix checks were no problem at all since I couldn't feel them.  We were hopeful that I would progress to 10 soon and be able to start pushing.

Katy expressed concern that the baby was having decelerations at times after contractions and that my contractions weren't consistent.  Both she and the doctor felt that his head wasn't engaging correctly either and that he was trying to come out with the side of his head instead of the crown of his head.

Around 5, Dr. Wells checked in on me again.  I was still dialated to 9 and even though he was still trying to come out with the side of his head, she suggested waiting another hour.  She was supposed to be going home and the on call doc would take over but she had paperwork to do and said she would check in another hour.  If I still wasn't fully dialated, she thought a c-section might be indicated since we knew the baby was big and he was trying to come out funny.

In the next hour, I got a new nurse (who I didn't like nearly as much as Katy) and flipped in bed a few more times.  When Dr. Wells returned, I was still at 9.  She suggested c-section.  While it wasn't my first choice as a method to give birth, I was exhausted.  It had been 13 hours, I was worried about pushing him out if he was big and sideways, and I just wanted to meet my little man already.  So I consented and things got set in motion.

A new anesthesiologist was taking over for the previous one (as it was shift change time).  He was from Colstrip Montana and his brother and parents lived in Great Falls.  My mom (who was with us) had been on a jury for a trial in which his brother was the lead attorney.  He was super nice and a very calming presence.  Think that God arranged that one?  Off we went to operating room. 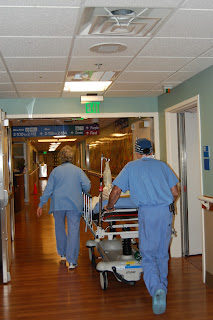 It was a surreal experience.  Going from the dim lights and calm of the hospital room to bright lights and people in masks in the OR.  Lots of activity and I felt overwhelmed.  Eventually Andrew and my mom came in all dressed in their haz-mat suits and masks.  The anesthesiologist made me numb and was behind me the whole time.  He did a year at Carrol College in Helena, I talked about Rocky.  There was a barrier in front of me so I couldn't see anything but there was a little window that he said he would flip down so when the baby was out I could see him.

Things got started and after a few minutes Dr. Wells said "Well he's looking right at me".  Apparently he was what they call "sunny side up" hence all my back pain during labor.  I heard a little cry, the window opened up and I saw my son for the first time.  I bawled.  He was covered in goop but so beautiful.  Of course they took him away to get him checked out (they had thought there was maconium in my amniotic fluid at one point) and weighed and all that.  My mom followed with the camera (I'm so thankful that she got to document this experience!) and after a few minutes they brought us our little Sawyer all wrapped up.  My expected 10 pound little boy weighed in at 7 lbs 9 oz and 20 3/4 inches long.  We got to cuddle with him while they finished stitching me up and headed back to our room where I finally got to hold him.  We spent that night and Wednesday night in the hospital and were discharged Thursday afternoon. 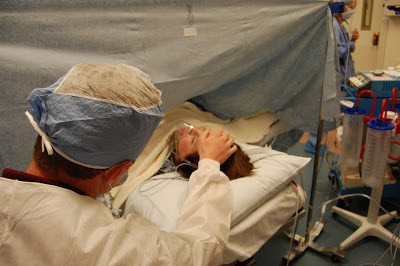 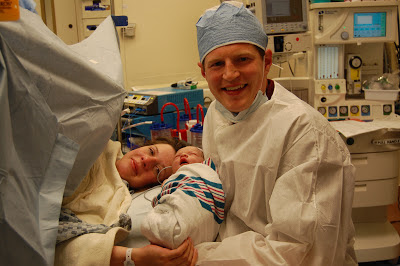 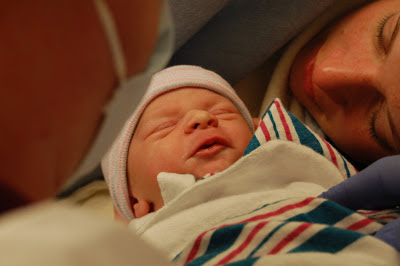 Looking back, there are several things that led me to Dr. Wells (who I completely trust) on that day, with that nurse, with that anesthesiologist and makes me believe that God was in complete control.

However, what bothers me slightly. is that all these medical decisions were made based on the growth ultrasound measurements and the anticipation if Sawyer being a 10 pound baby with a huge head (by the way, at his 1 week pediatrician appoinment, his head was in the 50th percentile).  I don't quite understand how the ultrasound measurements were so wrong.  Well I guess I've heard of them being wrong but if they are so inaccurate, why do doctors put so much weight into them?  Its possible that I could have waited to go into labor naturally, his head would have been in a better positions and I could have delivered naturally vs having a c-section and he would have been less than 8 lbs.  All that to say, I'm not going to bank so heavily on those measurements next time and not feel so pressured to induce.  Dr. Wells said that I could likely try for a VBAC (vaginal birth after c-section) in my next pregnancy.  I will definitely be using her again as my OB.

Evergreen is a fabulous hospital - the entire staff from the nurses to the lactation specialists to food services people are fantastic.  They are so supportive and we had such a wonderful experience there.  I would highly recommend giving birth to anyone who lives in the Seattle area.  They also have a lot of great resources for follow up - lactation consultants available by phone, free parent baby classes (which I will go to starting next week) where you get to hang out with other mom's who have 0-3 month babies, a 24 hour nurse line, etc.
﻿﻿
Here are a few other pics from our stay:

My birth story is a positive one - no complications and not a lot of suffering on anyone's part.  I couldn't have asked for a more perfect little man.