My little boy is 3 months old.  I can hardly believe how fast the past 3 months have gone by and how much Sawyer has changed since we brought him home.  He is starting to develop his little personality and he is going to be a charmer. 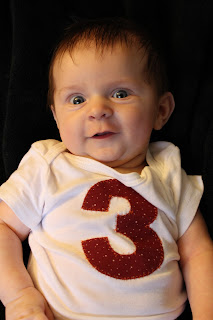 Size
We didn't have a 3 month check with the pediatrician so I don't have official height and weight.  According to our scale at home he weighs right around 15 lbs and is 25 inches long.  He's definitely into size 2 diapers and has moved into 3-6 month (Gerber and Gymboree) and 6 month (Carters) clothes.  I'm sad that I've had to put away all the 3 month stuff but its also fun to have a whole new set of clothes to dress him in :-) 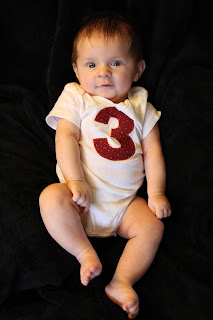 Developmental Milestones
Smiles are much more frequent and in response to seeing things he likes - especially Mommy.  He had now found his hands and they are in his mouth a lot.  He tends to favor left vs right so we are thinking he might be a lefty.  This may give my dad hope that he will become a left handed relief pitcher, preferably for the Cardinals.

His head control is really good and he can sit upright with support and is starting to put more weight through his legs.  He still isn't a fan of tummy time but lasts longer and is able to hold his head up for quite a while.

Eating
At 15 lbs, its safe to say he is eating well.  He screams most when he's hungry and can go from perfectly content to hungry in a finger snap.

Sleeping
We are making good progress in the sleep department.  He's given us a couple of 6 or 7 hour stretches.  We've started a bed time routine of bath or lotion rub down with lotion that is the same scent as his bath wash, eating, reading a story and then rocking.  Some days he's out right around 8 when we start, other days he refuses to sleep until 9 ot 9:30.  He usually sleeps until at least 2 and sometimes will go to 4 or 5, and then will sleep again until 7:30 or 8.  Then he's up for a feeding, awake for an hour or so and then naps for 1.5 to 2 hours.  He may take a short nap after his late morning feed and usually is down for a 2-3 hour nap in the afternoon starting between 2 and 3.  If only mommy would go to bed at 9 when he goes to bed we would be well rested but that usually doesn't happen.

Likes/Dislikes
He still loves the wubbanub and his fuzzy blanket.  He's happiest in the mornings when he first gets us and we get lots of smiles.  He's starting to like facing out to be able to look around more.  He usually fusses when he's over stimulated or hungry.

I look forward to watching his personality continue to develop and starting to interact more.  I think he will get good a peek-a-boo soon! 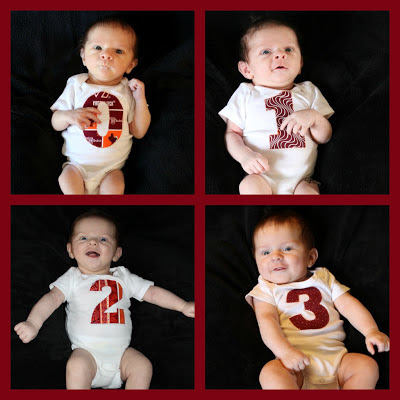 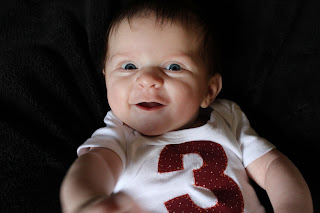