As of Friday, Sawyer is 4 months old.  Can you believe it?  It was just a year ago that that second blue line showed up on a pregnancy test and now I have this amazing little boy.  Boy, how life has changed...and how much my heart has grown. 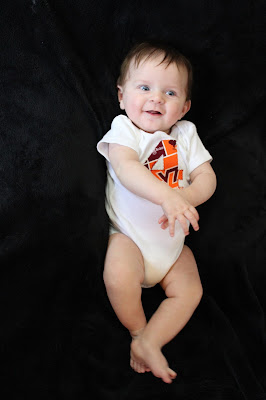 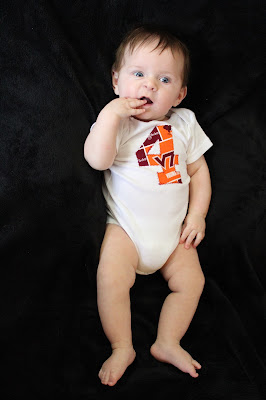 Developmental Milestones
Sawyer now giggles (so much fun!) and responds to Mommy and Daddy when he sees us.  He is quite the flirt with the ladies and even giggled and flirted with Dr. Irwin at his check up.  He is able to grab toys and bring them to his mouth and has even been able to get his Wubby into his mouth on his own a couple of times.  In general, his hands are almost always in his mouth (and if you could see the 400+ photos I sorted through from the camera, at least 60% of them had his hands in his mouth). He has rolled from his belly to his back a couple of times but not purposefully and can roll part way from his back to his belly.  He has really good head control now and can stand and sit with support (or in his jumperoo or in his Bumbo seat).  He has also become quite the little chatterbox.  Often in the mornings when he wakes up he talks to himself for several minutes before he starts getting anxious to get up.  His little noises are so cute.

Eating
He's eating like a champ.  I think we are going to hold off on solids until around 6 months.  Based on my own research about childhood obesity and the current AAP recommendations, I feel this is the wisest decision. I talked with Dr. Irwin and she said it was fine to start now or wait until 6 months and that solids were mostly meant for oral exercise and didn't provide any nutritional value right now. I still have plenty of breast milk and Sawyer has been taking a bottle well from Andrew when I have been working.  Hopefully this will continue with the nanny that will start with us in February.  If he starts showing a ton of interest in eating off our forks and spoons soon then maybe we will try.

Sleeping
Sleeping is going surprisingly well.  We have established a good bedtime routine and he is usually asleep around 7:30.  He will sleep until 3ish and get up to eat and then go back to sleep until 6:30 or 7.   Naps during the day are variable.  He usually takes a couple of short (45 min to an hour) naps in the morning and then a longer nap in the afternoon if we are lucky.  He definitely naps longer if he's being held vs. in his crib or chair but according to the leader of my parent baby class that is developmental and he should outgrow it.  For now, Andrew and I enjoy some time together after he goes to bed and I try to get to bed by 10 11.

Likes and Dislikes
Sawyer is coming around to tummy time - he can tolerated for a few minutes before breakdown and will even give us a smile sometimes.  He can last longer if he is distracted by a toy.  He also likes his Nuby keys since they are easy to grab onto.  He continues to love bathtime and his Wubbanub.  His new toy is the Jumperoo - he hasn't figured out how to bounce in it yet but he likes to play with the toys.

We did discover with his most recent cold that he DOES NOT like getting the snot sucked out of his nose.  You almost need to put in ear plugs before you start.  He also doesn't like being woken up from a nap when he is not ready - its a guaranteed formula for a 10 minute screaming fest. 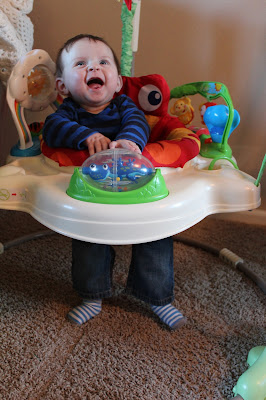 Overall, he's a pretty content kid as long as he's fed and has gotten a good nap. He's also pretty handsome...but I suppose I could be a little biased... 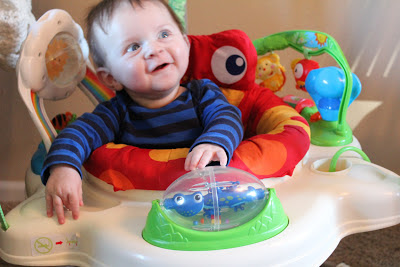 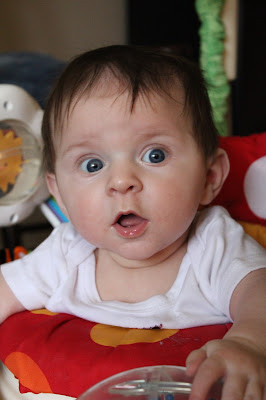 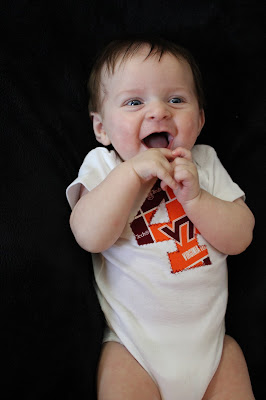 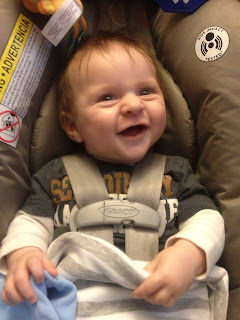 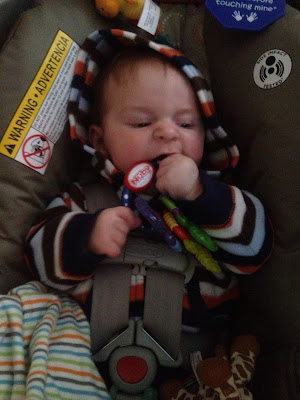