Today was the worst day of my Mommy career as of yet.

It really wasn't that terrible and I'm sure I will have worse days in the future but still, it took its toll on me.

I had started writing this post about this weekend and how I just needed to decompress and didn't "feel like" being a mom that day (and the mommy guilt that accompanied such thoughts).  Well, I've since abandoned that post and glad I didn't ever get around to finishing it because it was plain selfishness and I feel even worse about it after what happened today.

We were at parent-baby class today - there was a speaker talking about baby sign language and then we were sitting around talking about working and being a mom.  I've really enjoyed these classes mainly because I find that other moms are going through the same things I am so its nice to have that camaraderie.  I used to go to the Tuesday class but had to change to the Wednesday class since going back to work.  I'm still getting to know the moms in my class but my old Tuesday leader was filling in today.

Anyway, I was sitting on the floor with Sawyer and he was standing and holding on to my fingers.  All of the sudden he let go....and fell backwards before I could catch him....and his head bounced off the floor.

I swear it happened in slow motion.  If there had been a camera on my face I'm sure my eyes would have been as big as dinner plates and my mouth would have been mouthing "Nooooooo!".

Sawyer of course screamed and I picked him up and held him saying "I'm sorry, I'm sorry, I'm sorry."  I know that everyone felt terribly sorry for me.  I was actually a little embarrassed that it happened in front of other moms - like they were all judging me or something.

Anyway. he cried for several minutes and then spent another 10 minutes just whimpering - my heart broke into little pieces with each whimper.

As soon as I got out to the car I Googled (yes Googled - no time for Microsoft loyalty in times of crisis) signs of baby concussions.  One of them is drowsiness.  Well, Sawyer fell asleep on the way home - however, he hadn't really napped much since he got up so was due.  It could have been perfectly normal..,  but when I got home I called the nurse line at the pediatricians office and when they called me back the call woke Sawyer up and he was a little fussy.  The nurse said because he was under 6 months that it would be a good idea to check him out.  They had an opening in 30 minutes so I took it.

Well, Sawyer was due to eat so we fed him and then headed to see the doctor.  He turned into his charming little self and flirted with the doctor.  She checked him out and gave him a clean bill of health.  She said to watch for fussiness or vomiting more than normal and to call if anything else came up.

We came home and Sawyer and I snuggled for a while and he took a couple hour nap and appears to be fine. 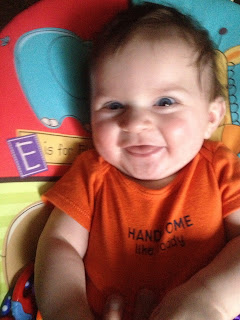 As for me?  I'm emotionally drained.  I didn't want to put him to bed tonight - I just wanted to hold him.  I'm sure I will be checking on him multiple times.  Taking him to the doctor was probably better for me than it was for him.  And I just want to put him in a protective bubble so he will never get hurt again.  I know that he's a boy and this is likely the first of many head bumps but sheesh!  What am I going to be like when he wants to play football? I'm guessing I will need a prescription for some Valium.


On a completely separate note, I drove through Starbucks today and they have a new video monitor when you are ordering.   So you can see the person you are talking to over the intercom.  I was considering getting a pastry with my coffee but somehow I thought the barista would judge me because I could see him instead of talking anonymously into the box....maybe I have issues.