I have to say that I enjoy reality shows.  I've watched many over the years and my favorites are more geared towards competition involving skill and talent vs those that are mostly just for drama.  So, I thought I'd share my opinions on this season's shows.

I have watched The Bachelor/Bachelorette in the past and made a conscious choice to quit watching.  It drove me crazy that they all just made out with each other and the guy would tell each girl how much he liked them etc.  Plus, I feel (as with many shows) that the novelty has worn off.  People audition - and producers choose them - to be the dramatic attention grabbing person on purpose.  Its so full of drama and artificiality and I would get so emotionally involved that I just had to quit.  I usually have an idea of what's happening on The Bachelor through other blogs or People magazine (I subscribe) but I don't actually watch it.

*if you do watch, I'm not judging you - just stating why I choose not to watch

I've also in the past watched American Idol.  I was a dedicated watcher Seasons 2-8.  I was SHOCKED when Daughtry was voted off and thought David Cook was definitely the right choice over Archuletta.  However, the last few seasons I've just gotten bored.  Nobody is original anymore and with all the judging changes I just am not interested.  Plus, its two nights of TV and Andrew (the man who has more audio books on his ipod vs music) doesn't care to watch either.  When I started skipping episodes I really didn't miss it so I haven't kept up.

Dancing with the Stars - I will watch this occasionally if I really like one of the celebrity contestants.  But its so much TV to watch (2 hours on Monday, another hour on Tuesday) and we had too many other shows at the same time so I usually don't watch it. On a side note, if I was ever a celebrity and on that show I would want Derek as my partner - he is amazing and always choreographs numbers to emphasize his partners strengths and not to show off his own skills (*cough cough Mark Ballas*).

Currently, I'm watching a few reality shows - Biggest Loser, Top Chef and Project Runway.  I usually DVR them and watch them on my days off while Sawyer naps (currently watching Project Runway from last night while I write this).  Here are my thoughts:

Biggest Loser:
First things first - Gina has GOT TO GO!  She drives me insane!  She acts like a 5 year old and throws a tantrum when she doesn't get her way or someone hurts her feelings.  She's lost a lot of weight but I have a feeling that she would be a person who could gain it all back because she's not addressing the real issues of why she is the way she is.

This week Jillian (so glad she's back!) wanted somebody to be able to run for 5 minutes on the treadmill at 5.5 or 6 mph.  I couldn't believe that no one could do it.  I'm in terrible shape but I could run for 5 minutes (granted, I wasn't in the middle of an intensive grueling workout and very well would have done the same thing).  I love that Jillian freaked out at the other trainers.

I was bummed that Francelina went home.  I suspected last week that there was something going on with her and Jeff since Jeff didn't vote for her.  I don't see them as a couple but if they are happy who am I to judge.  I love her attitude and hope that she can continue to lose weight (and become a doctor!) on her own.

I'm totally on Team Danni.  That girl is a rock star and I love that she chose to run the mile with Sunni during the kids challenge.  I hope that she makes it to the finale and wins it all.  She is a hard worker and doesn't complain. 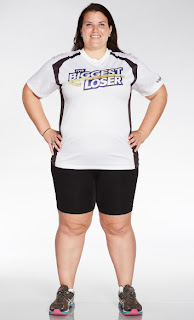 I wish this show was on every day and I could watch it while I worked out....that would require me to actually work out on a daily basis which would be good for me too.  I'm always so motivated to work out when I watch.

Top Chef
This season was extra fun because it was in Seattle.  I wish I could have been at some of the events (which all took place over the summer when they filmed) because the food looked amazing.

The first part of the finale was this week and the top three ended up being Brooke, Sheldon and Kristen.  This is the first season of Top Chef that I've watched where I really would be happy if any of the people won.  And it got narrowed down to Kristen and Brooke so it will be a female winner this season.

Project Runway
I really haven't enjoyed this season and the team challenges.  Part of it could be that I hate conflict so all the drama that goes along with team challenges drives me crazy and makes me uncomfortable.  And I miss Michael Kors along with his Jewish euphemisms.  Zac Posen is just too nice....and kind of girly.

There's no one person that I really like so far and its because the teams make it hard to see people's true aesthetic and work.  The challenges have been interesting - I liked the flowers and hardware one as the non traditional challenge.

Joe was crazy so I'm glad they got rid of him.  No actual woman wants to wear ginormous futuristic clothes.  Benjamin (blond Australian dude) drives me crazy with his attitude and he's constantly in panic mode.  Daniel is getting entirely too cocky and it was nice to see him get a little dose of humility in the bottom this week.  I can't decide if Patricia is genius or a little too into the Native American thing...

What about you?  Any reality shows you are addicted to?  What are your thoughts on Lose, Top Chef, and Project Runway?
Posted by Sarah @ For the Hall of it at 7:42 PM