Yep, you read that right. Bacon, beer, chocolate and cheesecake all wrapped up in one dessert.  This could be considered perfection among many foodies (as well as my husband).

For Christmas this past year, I gave Andrew a 12 days of Christmas themed gifts.  Day 12 was 12 months of pie.  I promised him that I would make him one pie a month all year since pie is his favorite dessert.  Cheesecake counts as pie right? Well it does in my book.  January was a chocolate pretzel pie that ended up being a partial fail (and a total blog fail that I never got a post written for it).  So I'm making up for it with this one and hope to let you see all the pies I made.

I found this recipe pinned on Pinterest and knew that I had to try it. 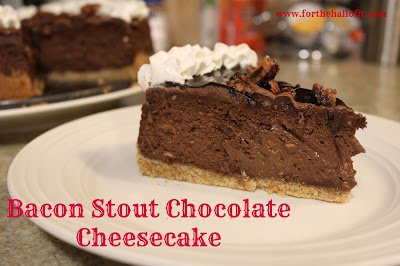 
Place one oven rack in the middle position, with one rack below. Preheat oven to 350.


In a pot over medium high heat, add the beer and the chocolate, stir until melted and remove from heat. Allow to cool.


In the bowl of a stand mixer fitted with a paddle attachment, add the cream cheese and the sugar and mix until smooth. One at a time, add the eggs, scraping the bottom of the bowl between additions. Pour the cooled chocolate into the mixer and beat until well combined. Lift the head of the mixer and add flour, cocoa powder, espresso powder, and bacon over the batter, stir on low speed until just combined.


Pour the batter into the pan over the crust.


Place the pan in the oven in the middle position. Place a baking dish on the rack below the cheesecake, fill with water.


Bake the cheesecake until the center no longer jiggles when you shake the rack, about 45-50 minutes. This isn’t a situation where a tooth pick inserted in the middle should come out clean, you just need the center to set and it will continue to set as it cools. Remove from oven.


For the topping, warm your hot fudge sauce so that it is pourable. Pour onto the center of the cheescake carefully, and allow to sit and solidify for 15 minutes. Top the chocolate with the chopped bacon. In a stand mixer fitted with a whisk attachment, whip the whipping cream until soft peaks form. Add the sugar, and continue whipping on high until stiff peaks form. Place in piping bag fitted with a decorative tip (I used Wilton 2D) and pipe border of whipped cream around the edge.


Source: inspired by Dogfish Head Brewings and Eats, base cheesecake recipe from The Beeroness 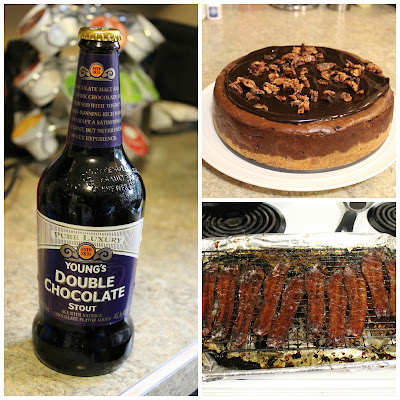