I know I say this every month, but seriously - how is my boy already 7 months old?  Its hard to remember what our life was like before our little man was a part of our world.  It has been so much fun to see Sawyer's personality develop and how interactive he has become.  We are having so much fun watching him learn and discover his world. 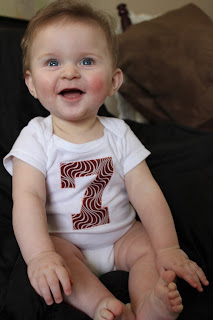 Size
I haven't officially weighed him, but its highly likely Sawyer near the 20 pound range and is around 27 inches long.  He's on the tail end of the size 3 diapers and we put him in size 4s at night.  He well into 6-9 and 9 month clothes and close to out growing 9 month jammies.  We really need to get him to next stage of car seat soon. 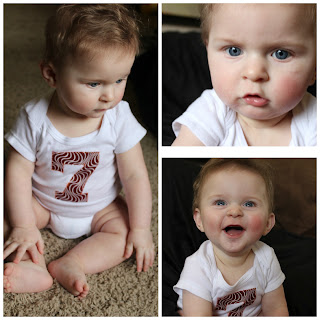 Developmental Milestones
Sawyer is becoming a proficient sitter and that is his position of choice.  He's not quite as fond of laying on his back to play.  His sitting is pretty steady - occasionally he gets distracted and tumbles over.  He likes to stand with support and play in his jumperoo.  At this point he has very little interest in crawling.  When he's on his tummy he only stays briefly and then rolls over to grab his feet.  He does like to wiggle and push himself around on his back.  Right now I think I will enjoy the fact that I can set him down and walk away without him getting into too much trouble and procrastinate on baby proofing.

Still no teeth but I swear they will make their appearance any day now Lord willing. 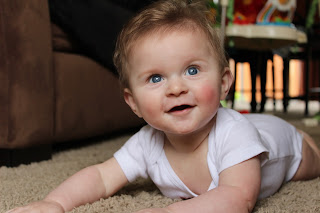 Eating
Solids are going very well.  He has liked almost everything he's tried.  He loves eating his puffs - little cereal pieces that easily dissolved.  He can grab them with his hand but sometimes has difficulty getting them in his mouth smoothly and they often end up on the floor.  So, Charlie enjoys the puffs too.  Sawyer still gets a steady diet of breastmilk 5 to 6 times a day and mommy still produces more milk than she knows what to do with.

Sleeping
Ugh.  The last 5 or 6 weeks have not been so much fun.  Sawyer went from sleeping pretty well to waking up every 1-2 hours.  In the last few days we've resorted to crying it out and trying our best to keep him on a consistent schedule.  Things have improved but we are still getting up a few times with him.  This past week he's also caught a cold which hasn't helped.  I'm desperately waiting longing for the time when he starts sleeping through the night.

We have transitioned out of the swaddle and occasionally he will sleep on his tummy.  He will nap in his crib but generally his naps only last about 45 minutes and sometimes less.  In an attempt to get him on a schedule we've at times held him to nap just to get him used to sleeping at that time a day.

Likes and Dislikes
Sawyer continues to like his feet and has added an array of toys to his favorites.  One is a cell phone that Grandma Hall gave him and another is a remote control that I got for him at a consignment sale.  He loves to chew on his Sophie the giraffe toy and jumping in the jumparoo.  He has become very aware of Charlie and loves to watch him and especially loves when he gets doggy kisses.

Sawyer is not a fan of having his nose wiped or at times being put down for a nap.

We took a trip to Virginia to visit Grandma and Grandpa Hall and Sawyer proved to be a good little traveler.  He flirted with the flight attendants, took some good long naps, and we managed to keep him on a west coast schedule.

All in all, Sawyer is a pretty content little guy.  We can cart him around to a restaurant or to Target and he's generally pretty happy.  He certainly adds infinite joy to our lives. 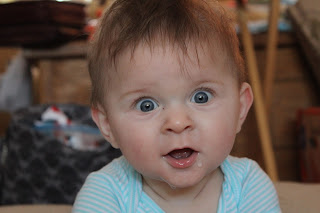 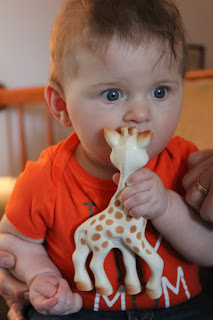 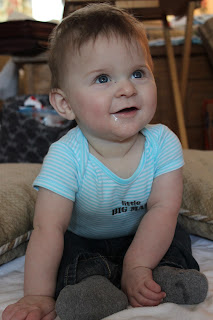 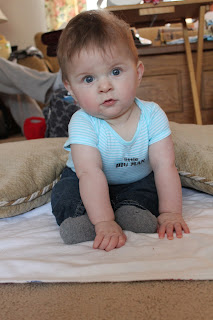 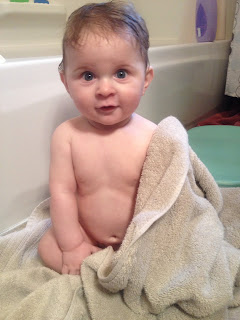 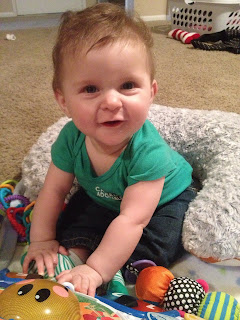