Hi Friends!  Its Wednesday and a holiday week.  We've had some awesome friends in town from the East Coast (one of Andrew's college roommates and his wife) and then his parents come on Thursday and we are headed to the Oregon Coast for the weekend.  I'm looking forward to getting some time on the ocean and hoping to get a book read while Grandma and Grandpa entertain Sawyer.  I may even get a date night with the hubby.  I can't remember the last time we ate in a public place without a screeching child...

But, its time for some confessions.  Linking up again with E at E, Myself and I.  Go check out her newly designed blog - it looks amazing! 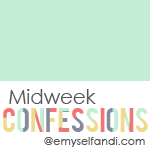 - When Sawyer is done eating, I more often than not just sweep out the high chair onto the floor and call over the dog (who is usually sitting right there anyway).  Its nice to have a vacuum that I don't have to plug in.

- It has been ridiculously hot and humid here in Seattle over the past few days.  I've eaten my fair share of popsicles and ice cream for the sake of "cooling down"

- We have portable air conditioners that we keep in our bedrooms for just such a heat wave (very few people have central air here).  We could keep it at 75 but we prefer it under 70 if possible.  I have to be cold when I sleep.  But that means we have to run the air conditioner all day.  Our electric bill is going to be ridiculous.


- I've always scoffed at those people who aren't gluten intolerant but decide to give up wheat anyway because it seems like the trendy thing to do.  I'm afraid I might become one of them!  I read this article about how wheat is so genetically modified that it really isn't a good product anymore.  Andrew's dad gave up wheat last summer and went from being on 2 blood pressure medications to none.  I'm intrigued....anyone have any experience with this?

- Charlie's nails got so long that he refused to walk on the deck because he couldn't get any traction.  We finally took him in to get them trimmed (and took him swimming in the river as a reward).  Now you can't hear him on the tile and linoleum so he scares the crap out of me because I can't hear him coming

- I had a very weird dream that I was on America's Next Top Model but Alton Brown was my mentor.  Apparently my Food Network watching and ANTM marathons are messing with my brain.

Happy Fourth of July friends!  Have a safe and happy celebration.