Okay so I totally missed the Five on Friday link up party.  Then I had grand ambitions to do a Six on Saturday post and I missed that.  So I guess y'all will have to settle for a Seven on Sunday.  Here we go.

<<ONE>>
My boy is 11 months old today.  I can hardly believe it.  The past year has flown by in the blink of an eye.  I feel like if I blink again he will be off to college.  And my baby is not much of a baby anymore.  Every day he is more and more like a toddler.  Gah!  Time slow down please!

Oh my gosh I am in love with this jewelry line.  I hosted a party yesterday with some girlfriends and I am officially hooked.  I had already gotten a few things but it was so cool to see it all in person!  There were several pieces that I had seen in the catalog and didn't think I liked but then I got to see it and touch it and try it on and I wanted it!  I'm seriously considering becoming a stylist - mainly for the free jewelry.

Here is one of the necklaces on my wish list:

I witnessed (and reported) a mother leave her child (I guessed around 3 years old) locked in the car on a hot day.  She pulled in as I was bringing my stroller back to the car after my Stroller Strides class. I did a double take when I realized she left the kid in the car.  The kid tried to open the door from the inside which set the car alarm off.  She came back, said something to him, rolled the windows down half way and walked away again.  I called the shopping center security to inform them.  In hindsight, I wish I would have said something to her and stayed until security got there to know he was okay.  Or I wish I would have just called 911.  Not sure what the laws are in Washington but I'm pretty sure leaving your kid unattended in a car (especially on a hot day) is illegal.  Ridiculous.

Ugh.  The last few nights of sleep have been better.  But, this sleep regression has changed my mind about having a second kid anytime soon.  We had originally discussed having kids about 2 years apart which would put me pregnant again early next year.  However, I've decided I need another year to catch up on all the sleep I've lost this year.  So, Sawyer ain't getting a brother or sister anytime soon.  Maybe that was his plan all along...

I'm so ready for fall to be here.  It may be blasphemy to say this as a Seattleite but I miss the rain.  I'm ready for cool days where you put a sweatshirt on, grab a Starbucks, and take a brisk walk.  I'm ready for jeans and boots and scarves (especially since I just bought a super cute Stella & Dot scarf at my party on Friday).  And I keep seeing posts on Pinterest like this: 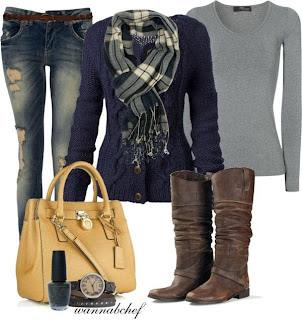 Fall also means the start of football season!  I used to care less about college football but after meeting my husband and finding a team to root for I love it.  I just made an order at the Virginia Tech bookstore so Andrew, Sawyer and I will all be decked out for this season.  Its unfortunate our opening game is against the Number 1 team in the nation but hoping for a better season from the Hokies.

*Logan Thomas I'm talking to you.  You better get your act together this season or I will fly to Blacksburg and kick your butt personally.

All this back to school stuff makes me want to be organized.  I know several teacher friends who are posting about their teacher notebooks.  I want one of those cool organization notebooks with cute chevron dividers even if I don't need it.  I guess I'll have to settle for organizing my closet instead.  Can I make a notebook for that?

Hope everyone had a great weekend.  Stay tuned for Sawyer's 11 month update - got some cute pictures.  This kid could be a model.  Must be all the America's Next Top Model I watched while I was pregnant.
Posted by Sarah @ For the Hall of it at 9:56 PM