I love the Miss America pageant.  I don't know why.  I remember watching it as a kid with my family.  We would try and guess the top 10 based in their introductions.  I remember watching Heather French who was the first deaf contestant win and how beautiful her ballet dance was.  Back then they focused a lot more on their platform and answers to the judges questions.   These days I don't feel like the competition is as much focused on brains as it is on beauty.  Now I still enjoy seeing these smart women compete but I also enjoy mocking them a little.  Especially when their major is in cosmetics and perfume.  Or that at least half of them want a career in broadcast journalism (this year Miss Georgia wants to get a law degree....to become a legal correspondent for a national news program).

I cheated a little this year and looked at their profiles ahead of time.  Since the show doesn't focus much at all on their platforms or scholastic ambitions, I wanted to know what these girls stood for.  I'm a little biased towards those who are going into the medical field or even law school mainly because you have to have ambition and brains to do that.

I also wanted to create a superlative list to highlight some of my thoughts of this year's field.

Best Intro: District of Columbia - "I'll be listening in on your phone calls, just kidding" Hahaha! Love that she made political humor.

Worst Intro:  South Carolina "From the state where 20% of our homes are mobile cause that's how we roll".  Umm, not sure that's something you should be "bragging" about...

Most Generic Ambitions on profile:  Miss Kentucky.  "Scholastic ambition to graduate with a double major and attend graduate school.  Career ambition to establish a career in public service."  What???

Contestant who's teeth should have their own zip code:  Mississippi

She was also way to skinny.  This photo doesn't do her teeth justice.

Most interesting contestant that we didn't get to hear about:  Iowa.  She was missing her arm!

Best Swimsuit: New York.  She stood out with the Zebra print.

Most Awkward walk - Wisconsin.  I think she might have been having a seizure.

Worst Evening Gown: Georgia - pretty sure she made it from her grandmothers doilies.  And what is with the peplum?

*sidenote - I don't know why they pick white evening gowns.  They look too much like wedding dresses.

Best Talent: Connecticut with her Irish dance.  New York was most interesting with her Bollywood Fusion dance and I'm sure it looked harder than it was but overall I didn't think it showed that much talent.

Worst Talent: Texas.  Off pitch jazz singing.  I hope it was just her nerves showing.

Contestant who grew on me the most:  Connecticut - didn't like her at first but her evening gown and talent won me over.

Best Interview Answer:  Nobody!  I though no one actually answered the questions.

Stupidest Interview Answer: Oklahoma/Florida tie.  Oklahoma had a softball of a question about Miley Cyrus and she tried to make a joke that no one got.  Florida just bombed it but her question was about the economy.

*Sidenote:  They say that all the interview questions are considered equally weighted.  I totally disagree.  A question about whether you think Miley Cyrus twerking is distasteful or creative expression and a question about whether the US should get involved with Syria are completely different levels of difficulty.

All in all, I picked New York and California from the start to finish 1-2.  Both were beautiful, had good talents and were ambitious in their scholastic and career goals. 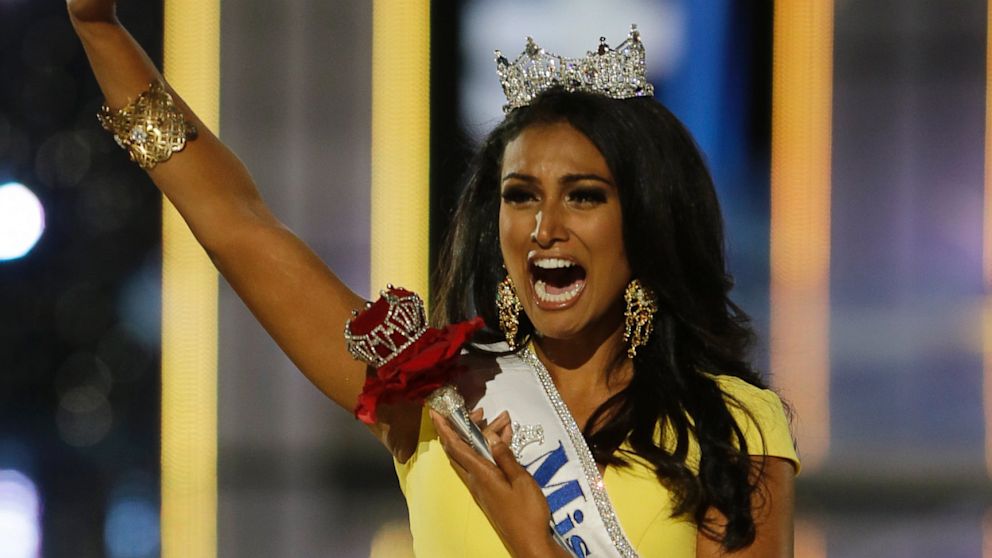 I've read online this morning that some people are upset that an Indian-American won the competition which is heinous.  She is an American, represents herself and her culture well, is beautiful and smart.  That is what the competition is about.  Even worse, people were calling her Arab (which she is not) and her dance Egyptian (which it was not).  Some people.  Lame.

Well that wraps up another Miss America.  I had fun watching and FB chatting with my friend Sara - she and I used to watch it together in grad school.  We said last night that we need to go to the pageant one of these days.