Hi Friends!  There's no confessions link up this week so I figured we could do some hashtags instead as I've got lots of random tidbits to share.

- I realized the other day that you can actually see muscle definition in my arms!  I've never had buff arms but all those planks and push ups are starting to pay off!  #checkouttheseguns #buffmommy #Ifeltveryawkwardtakingthispicture 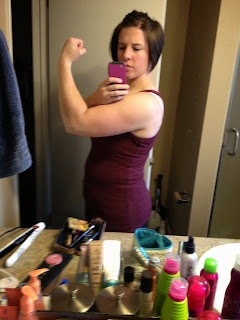 - I had two pairs of Citizen of Humanity jeans that I FINALLY took to get fixed at the cleaners (one had a small hole that needed to be patched and the other needed to have the button fixed).  I tried both of them on and while I could get them buttoned, they were certainly not comfortable to wear. #motivationtolose10morepounds

-While trying on said jeans, I realized that I can no longer wear super low cut jeans.  After I tried on my Citizens, I put on my Lucky Sofia Bootcut jeans - they are A) cut for a more curvy figure and B) specially cut to have a higher rise in the back.  They button just below my belly button and well cover my c-section pooch and are so comfy. My skinny jeans are also from the Lucky Sofia line.  #Imnot21anymore #momjeans

- I've been tracking my Stella & Dot Sample order and it should arrive tomorrow.  I. Can't. Wait.  #ChristmasinOctober

- Have you discovered the Polyvore site?  I've seen it a lot with my Stella & Dot business - you can create your own fashion or home décor looks like the ones you see on Pinterest.  I'm slightly addicted to creating stuff especially with Stella & Dot jewelry.  #justwhatIneed

-Sawyer has officially learned to clap.  Before if you asked him to clap he just crossed his arms and touched his elbows.  Now he puts his hands together and looks so proud of himself.  #hestoocute


That's all I've got for today.  Hope you all are having a great week!