Its definitely fall in Seattle.  There's a lot more grey out there especially now that the leaves have fallen off trees.  While it hasn't rained a ton (yet), its dark early.  And its cool outside.

On a cold day, there is nothing better than a delicious soup to warm you up.  I originally had this soup at a friends potluck and it was so delicious!  I eventually ran into the girl that made it again and asked her what the soup was called.  I googled (or Binged rather being the good Microsoft wife that I am) a recipe and it has quickly become a staple at our house in the winter months.  Its a great blend of tomatillos, cilantro, garlic and chicken that is low fat and healthy!  We've made a few tweaks to the recipe to add a little more flavor and more efficiency in the cooking process.

*I like a lot of garlic.  You can use less if you prefer
**I usually remove the seeds from 1 chile and keep them in the other and its a mild spice.  You can adjust spice level accordingly by taking out or leaving the seeds in

Bring 5 cups of broth to a simmer on the stove.  Remove chicken meat from the bones and put the bones of the carcass in the broth along with 1/2 the onion and 1/2 the garlic cloves.  (We also sometimes add a bottle of wheat beer).  Let simmer for 15-20 minutes, then drain solids and reserve broth.

Simmer tomatillos, remaining onion and garlic in sauce pan with remaining cup of chicken broth covered until tender about 10 minutes.  Drain vegetables and puree in a blender or food processor with jalapenos, cilantro, oregano, and salt.

Heat oil is heavy pot over moderately high heat until hot but not smoking.  Then add puree (be careful as it will splatter and steam).  Cook uncovered for 10 minutes, stirring frequently, until thickened.  Stir in 1 cup of reserved broth and simmer for 5 minutes.  Stir in shredded chicken and remaining 4 cups of broth and simmer partially covered for 20 minutes.

Serve in bowls with a squeeze of lime and cubed avocado.  You can also garnish with additional cilantro, radish, shredded romaine, or chopped onion if desired. 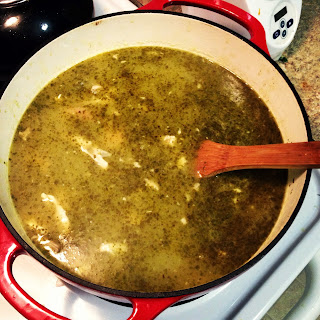 Its also great leftover once the flavors mix.

Bon Appetit!  How do you say that in Spanish?