Happy Monday friends.  It certainly is a FANTASTIC Monday here in Seattle after our Hawks throttled the Broncos yesterday.  What a game!  Its been so great to see everyone in our city supporting our team with 12th Man flags, jerseys, shirts etc.  My company had Seahawks week all last week so we got to wear our gear and everyone on their way out the door said "Go Hawks!". 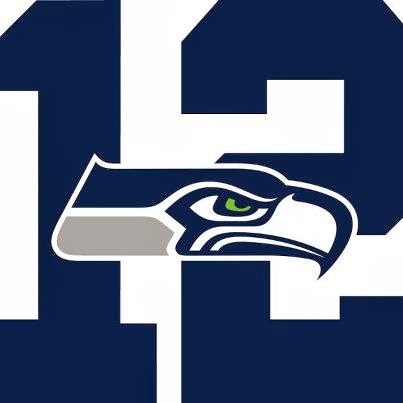 The Super Bowl holds a special place in my heart, more specifically the party we go to every year.  It was 5 years ago at this party that I met the love of my life.  Since we are approaching Valentine's Day I thought I'd share my love story with all of you.

Before I met Andrew I had only dated a few people.  I dated one boy in high school/college for 3 years, a guy my senior year of college for about 6 months and a guy in grad school for a couple months.  I guess those were people I had relationships with.  I had a few one time dates that never went beyond that.

Anyway, in 2008/2009, I was managing a clinic in Gig Harbor, owned a house in Tacoma and was pretty satisfied with my life.  I had a good church and small group, good friends, a dog and cat at home.  I knew God had a plan for me and I was content waiting.  My sister in law Becky had been telling me for a few months about this guy that had just moved to Seattle named Andrew that I needed to meet. {She didn't tell me at the time but when she met him she had a prophesy that he was going to be her brother in law} He had just moved to Seattle and had moved next door to my brother and Becky temporarily while he found a place to live. He had gone back packing with my brother and some other guys and gotten a "he's a good guy" stamp of approval from my brother.

In January 2009, I went for a walk with a good friend of mine and we were talking about life in genera and she asked me what my 5 year plan was.  I said, "I'm happy with where I'm at.  I like my job, I like my house, I like my stuff, I've got good friends.  I know God has a guy out there for me and whenever He's ready he will bring him into my life."  Literally, when I finished that sentence, my phone rang and it was Becky telling me "I've figured out a way for you to meet Andrew!  You have to come to the Super Bowl party next weekend!"

So, the next weekend I drove up to Redmond to attend the 6th Annual Weigh In Weigh Out Super Bowl Party.  At this party, those who choose to participate see who can gain the most weight during the game.  Seriously.  There is a trophy and everything.  It is quite the event.

Becky and JD told me that Andrew didn't know he was meeting me so there was no pressure.  They would not be offended if I didn't like him.  I made a conscious effort not to get excited because I have a tendency to make up these romantic scenarios in my head and then when they don't come to fruition I get disappointed.  So I had little expectations.  I was introduced to Andrew, we talked for a bit during the game and after.  He was definitely cute and seemed like a good guy.  I figured if it was meant to be we would run into each other again.

I drove the hour drive back down to Tacoma and by the time I got home he had already Facebook friended me.  Again, I tried not to get too excited.  I sent him a message the next morning and we began and email thread through that week.  The next weekend we went out on our first date and the weekend after that we went out a few more times as I was staying up in Redmond to help my mom take care of the twins while JD and Becky were out of town.

On Valentine's day we had our Define the Relationship talk (or DTR) and officially decided to date each other.


I was still a bit cautious with my heart at that time - I did not want to create these expectations to just be disappointed by a boy.  It had been a while since I'd dated anyone and I was protecting my heart and spending a lot of time in prayer about it.  About a month into it we took a little step back from each other to make sure that we were dating each other because we really liked each other and not because we just wanted to date someone.  We eventually decided that we both wanted to pursue this relationship.

A few months later, we ended up having a very serious conversation.  I had told Andrew some things about me and some things in my past that I was not proud of.  I cried, he hugged me and I thought he was okay with it all but it weighed on him.  He sent me an email later that night just processing his feelings.  It was the beginning of a work week so the next couple days we mainly communicated through email and talked through a few things.  I shed a lot of tears, made some blubbering phone calls to my mother and stressed a whole lot. And then he wrote me this:

"Some things about you I'd already known and I've obviously learned a lot more in the past 48 hours...And I was thinking in that in many ways because of what we have talked about in the last two days gives me an even more awesome opportunity to respect you and show you the love of Christ in ways that would not have been possible without this.  As you are well aware, I am human and certainly will make mistakes and am not perfect, but I want you to know that is my ultimate goal.  I want to be the best representation of Christ to you that I can possibly be."

With that, I was 100% head over heels in love with him.  This was the man I had been talking to God about for so many years.  I knew that he was the one.   We both knew at that point that we were going to spend our lives together.  We then became that really annoying lovey dovey couple that single people hate.

We got engaged that August and married the following March.  And the rest is history.

I love knowing that God had this all planned out before either one of us was even a twinkle in our parents' eyes.  The circumstances that brought me to Tacoma, him to Seattle, putting us both in the right place and mindset to pursue a relationship and the foresight he gave to Becky that we would be together.  It is very clear that this is what God intended for us and I am so grateful for God giving me such a wonderful man to share my life with.  He is a wonderful husband and fantastic representation of Christ for me even when I don't deserve it.  He is a great father to our child and I love that Sawyer will grow up with Andrew as his role model.

My cup runneth over.