And its only 4 days late....shut the front door.  I'm on top of it today people.  To be honest, its nap time and I really want to color in my super cool grown up coloring books but I told myself I couldn't color until I finished this blog post.  More on grown up coloring in a future post.

Walker is 7 months old!  Seriously?!?!  Time is going by too fast with this kid.  Lots of milestones over the last month and he is becoming his own little person. 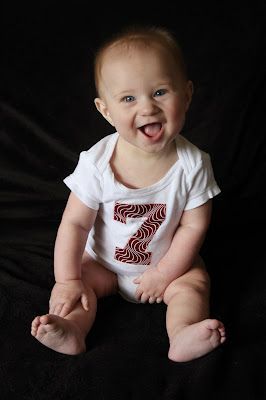 Size
I'm guessing he's near the 18 lb mark but I haven't weighed him and I swore that when we got him up the other morning he was taller.  He's been eating a lot of solids so I think that has helped him start filling out though he is still skinny compared to Sawyer who had a couple pounds on him by this point.  We have started using size 4 night time diapers on him to prevent leak outs.  And now that he's on solids he gets the stinky poop - blech. 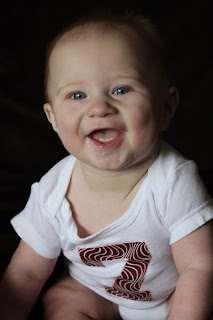 Developmental Milestons
When I took Walker in for his 6 month check I was a little concerned that he wasn't sitting up on his own yet (because Sawyer was at that point) but she said not to worry - he was plenty strong and would sit when he wanted.  Then my mom came out to help while Andrew was out of town and he was sitting by the time she left.  In a way this makes life a little easier because you can sit him down with a bunch of toys and he will stay entertained for a while (and he doesn't move!).  He can go from sitting to being on his tummy but then gets stuck there.  He's really good at getting his wubby into his mouth on his own which is helpful in his crib when he wakes up at night. 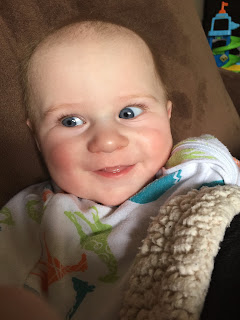 Eating
Walker has gotten the hang of solids now and is downing almost everything we give him.  He also really likes baby mum mums and the puffs.  He gets a little frustrated with the puffs because he will grab them in his fist but can't coordinate to open his fist to get them in his mouth.  The dog ends up eating more puff than he does but it keeps him entertained while we eat dinner.  He still prefers his milk direct from the source but we've switched to a faster flow nipple and he seems to tolerate that a little better though still will protest.

Sleeping
I think sleeping has gotten a little better.  He's pretty consistent on the times he wakes up - if I go in to feed him its about 20 minutes to eat and put him back down.  But I don't think he needs those middle of the night feedings - Andrew has tried a couple times to give him a bottle and he will protest (loudly I might add) and eventually just go back to sleep.  We should probably try sleep training here soon but I'm not quite sure we are all ready for it just yet.  I'd like to know he can roll and move enough to get himself comfortable in the crib before we start and we are really working on establishing the schedule now so that may also help.

Likes and Dislikes
Walker likes watching whatever is going on around him.  As long as he is in the middle of the action he's pretty content.  We constantly get comments on how happy and smiley he is and he really is a good natured kid.  He protests when he's tired or hungry.  He's becoming more aware of the dog (much to Charlie's chagrin) and is liking trying new foods.  He likes being in the car and the stroller and he likes to bounce whether in your lap or in his jumperoo.  He also likes bathtime so I think he will end up loving the water like Sawyer does.

Speaking of Sawyer, I'm hoping to give you all an update on him as well. 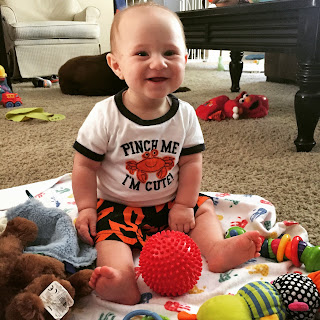 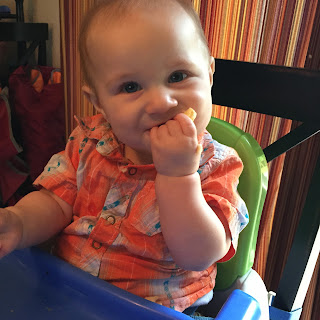 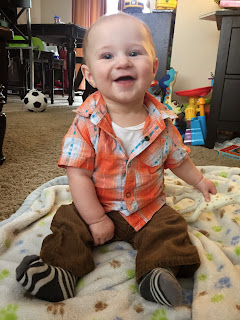 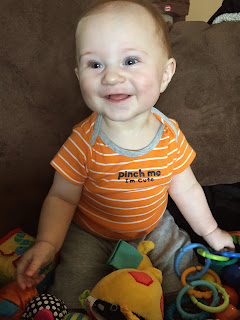 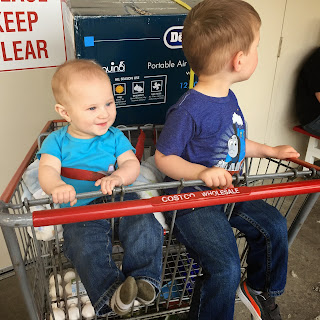 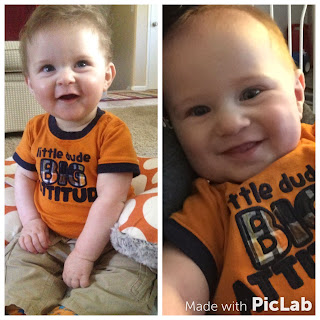 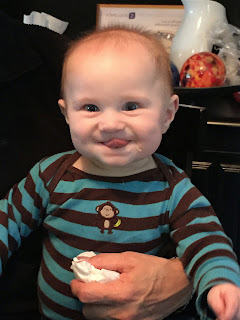 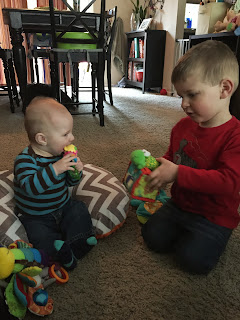 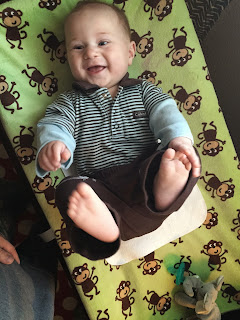 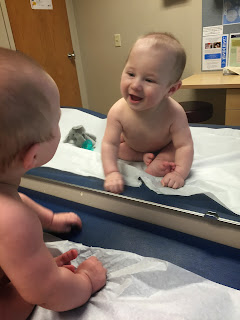